Background: Normal automaticity of the sinoatrial node (SAN) pacemaker cells is regulated by integrated coupled-clock system. Ca2+ signaling and Ca2+-activated phosphorylation signaling control the system rate and rhythm. Stretch of the SAN, which can be the result of hemodynamic overload, leads to tachycardia under normal conditions. However, acute SAN stretch is associated with arrhythmias in patients with cardiac mutations or with heart failure. Under these conditions, irregularities in SAN cells Ca2+ handling have been reported. Still, the underlying mechanisms of how changes in Ca2+ mediate pacemaker dysfunction are unknown.
Objective: We hypothesize that mechanical overload can modulate SAN function through mechanisms involving Ca2+ and post-translational signaling modifications in different cell compartments leading to arrhythmias in patients with cardiac diseases. We aim to design tools that investigate the cellular mechanisms associated with stretch, using experimental and computational approaches.
Methods: We developed a system to stretch SAN tissues isolated from healthy mice hearts and simultaneously measured the spontaneous beating rate using optic flow techniques. We compared these results to SAN tissues in response to beta-adrenergic stimulation using isoproterenol. In order to understand the internal mechanisms that connect between the mechanical load and pacemaker function, we developed a computational model of SAN cell.
Results: The response of the SAN tissues to axial stretch was similar to that under beta-adrenergic stimulation. In both, the spontaneous beating rate increased as the beating rate variability, an important index of cardiac diseases, decreased. The computational model predicted that in a pacemaker cell, the increase in Ca2+ transients and phosphorylation activity (cAMP and PKA) mediates an increase in L-type Ca2+ current and Na+-Ca2+ exchanger currents, which increases the spontaneous beating rate.
Conclusion: An increase in load by mechanical stretch of healthy mice SAN leads to tachycardia with no rhythm disturbance, mediated by changes in Ca2+ and phosphorylation signaling. These results can provide new insights on the molecular mechanisms in diseased SAN under stretch conditions. 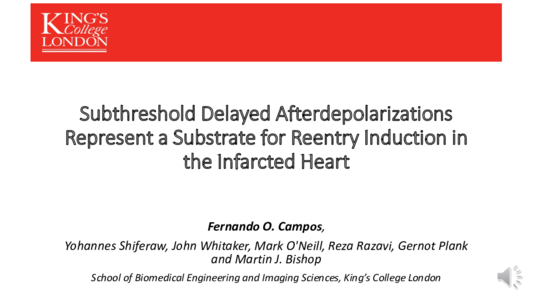