Background: Although immunosuppressive therapy with steroids has been the cornerstone of treatment of cardiac sarcoidosis(CS), there is limited data on the factors affecting the variable clinical response to therapy.
Objective: To identify predictors of clinical and echocardiographic improvement following immunosuppression in patients with CS and LV dysfunction.
Methods: Data of 75 consecutive patients with CS and LV EF < 40% from the Granulomatous Myocarditis Registry was analyzed. Details regarding clinical presentation, baseline electrocardiogram, echocardiogram, and 18Fluorodeoxyglucose (FDG) PET-CT were extracted from the registry database. Uptake Index (UI) was defined as the product of maximum standardized uptake value and number of LV segments with abnormal uptake on 18FDG PET-CT. All patients were treated with a standard treatment regimen of corticosteroids and methotrexate. Response to therapy was assessed 3-6 months after initiation of immunosuppression. Clinical response (CR) was defined as a reduction in NYHA Class >1, freedom from ventricular arrhythmias and heart failure hospitalizations. Echocardiographic response (ER) was defined as an improvement in LVEF > 10%. Complete responders fulfilled both CR and ER criteria. Partial responders had either CR or ER and non-responders had neither CR nor ER.
Results: Among 75 patients receiving immunosuppression, 41(54.7%) were complete responders, 15(20.0%) were partial responders, and 19(25.3%) were non-responders. When comparing complete and non responders, logistic regression revealed that a baseline UI > 28.2 (HR 1.25, 95% CI 1.07-7.16, p=0.015) was an independent predictor of response. UI was also a significant independent predictor when comparing all responders (complete and partial) and non-responders (HR 1.18, 95%CI 1.03-7.54, p=0.023). An UI > 28.2 had a good discriminatory power (Area under the curve 0.83, 95% CI 0.79-0.86) for predicting response. There was a strong correlation (r=+0.761, p=0.013) between baseline UI and ∆ LVEF at 3-6 months following immunosuppression.
Conclusion: A higher baseline 18-FDG PET myocardial uptake is an independent predictor of clinical and echocardiographic response to immunosuppression in patients with CS and left ventricular dysfunction.
Collapse 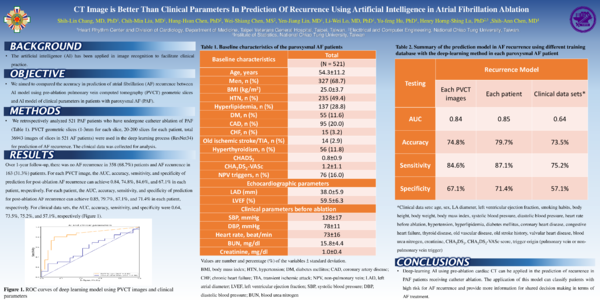 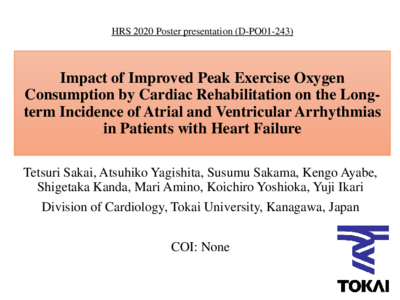 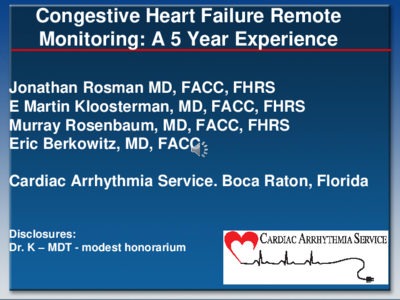 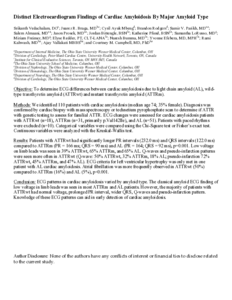 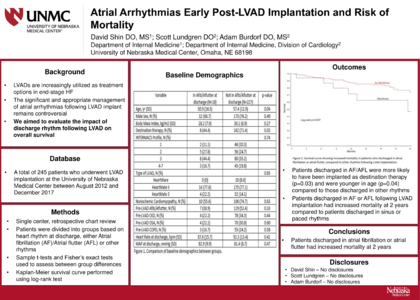 D-PO01-242 - Sacubitril/valsartan Versus Angiotensin Inhibitors For Prevention Of Arrhythmias In Heart Failure: A Systematic Review And Meta-analysis (ID 159) 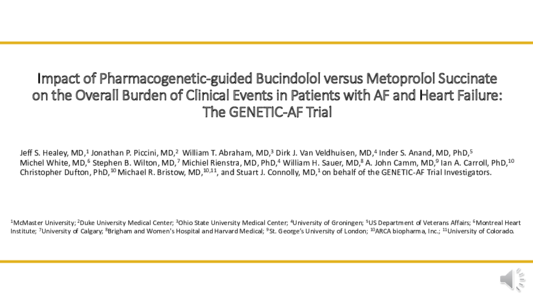 D-PO06-074 - Impact Of Pharmacogenetic-guided Bucindolol Versus Metoprolol Succinate On The Overall Burden Of Clinical Events In Patients With Atrial Fibrillation And Heart Failure: The Genetic-af Trial (ID 1375)