Background: Atrial fibrillation (AF) has a deleterious impact on outcomes in heart failure (HF) patients (pts) with preserved systolic function (pEF) but its mechanism is unclear.
Objective: We studied the impact of AF on clinical outcomes of HFpEF pts in the TOPCAT AMERICAS study.
Methods: We compared mortality & morbidity outcomes in pts in sinus rhythm (SR, n=1319) to pts in AF (n=446) on ECG at study entry during a mean follow up period of 2.9 years. We analyzed cardiovascular(CV) mortality & adjudicated modes of death in the study population.
Results: AF pts when compared to the rest of the study population were more likely to be older, male, Caucasian origin, have more alcohol use, diabetes, & percutaneous coronary interventions but less likely to have peripheral vascular disease. 6.3% were receiving antiarrhythmic drugs increasing to 8.7% during follow up. Increasing age & AF were associated with a higher CV mortality. AF pts had an increased CV risk of death due to pump failure (Figure, p<.0021, Hazard ratio (HR =2.23, 95% confidence intervals= 1.34-3.71) but not sudden cardiac death (SCD, p=0.88) or aborted cardiac arrest (ACA, p=0.66). This Increased risk for death due to pump failure in AF pts did not differ significantly by HF class at enrollment (HF class 1or 2 vs. 3 or 4, p=0.17 for AF interaction) but the HR was higher for class 3 & 4 pts.
Conclusion: 1. Loss of rhythm control with AF impairs CV outcomes in HFpEF pts by increasing risk of pump failure, possibly due to more dependence on atrioventricular filling for myocardial function in HFpEF 2. The limited impact of AF on SCD or ACA may be due to its earlier precipitation of pump failure mortality and/or a more limited arrhythmogenic substrate in HFpEF. 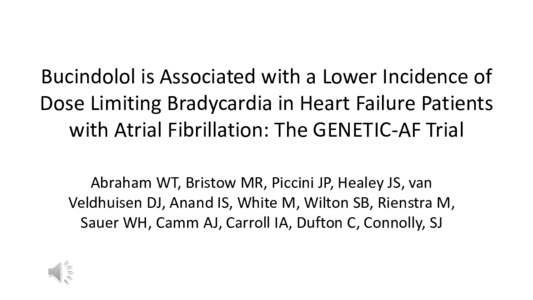 D-AB14-04 - Bucindolol Is Associated With A Lower Incidence Of Dose Limiting Bradycardia In Heart Failure Patients With Atrial Fibrillation: The Genetic-AF Trial (ID 1436) 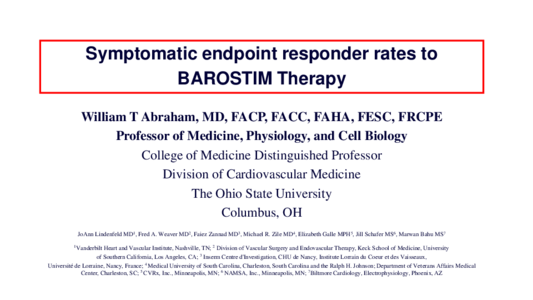 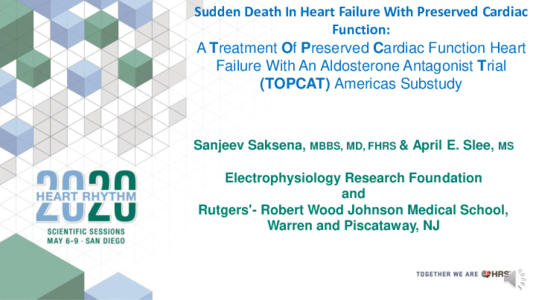